The ACEG Center continues with the organization of the second forum on “Agricultural Barometer” in Bilisht Administrative Unit. On 2 November 2018, the Albanian Center for Environmental Governance (ACEG) in cooperation with two local organizations, the Association ‘Gjelberimi” and the Devoll Citizen Advisory Committee (KKDD), held the second local forum to present the findings of the Agricultural Barometer of Devoll municipality. The environmental, agricultural and the legal policy experts presented a full-blown analysis that was undertaken during a two-month period, August-September 2018, on electoral promises of the Mayor, made during the electoral campaign of 2015 and the performance of the Devoll municipality governance for the period 2015-2018, focusing on only five key areas: agriculture, rural development and agrotourism, forestry, environmental protection, irrigation and drainage versus 34 concrete indicators. The legal expert presented the competences of the Municipality as per functions of the Law 139/2015, the philosophy and methodology used in the Agricultural Barometer and the target set in the study. Further, environmental expert Mr. Nika focused on 34 indicators and analysis conducted according to respective fields and function of the Law 139/2015. 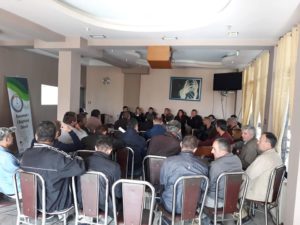 
During the discussion session, participants were introduced to the results of the Devoll Barometer and praised the work done as the first analysis of rural development in the area. Among the concerns raised by a village farmer from Tren was the question of the improper use of fertilizers and pesticides in agricultural products, saying: “The lack of an agronomist penalizes us to have a safe production of agricultural products. In this municipality, we have two types of land we do not know how to handle it. ” 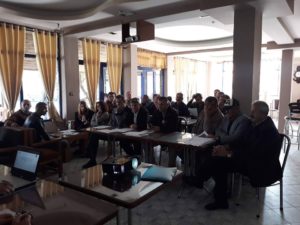 Presentation of Barometer results by the local expert. The photo was taken by A.Mema (ACEG).

It was evidenced that waste management and irrigation channels posed a concern to the community in the village of Bitinckë. Attendees stressed that waste management is an emergency, but at the same time it was agreed that for the sake of results, community awareness should be made to be more cooperative with the municipality and each other. In the framework of these discussions, agriculture expert B. Dervishi said: “We have lost the tradition of ploughing the agricultural land, and this brings economic harm to the farmers”, adding that besides these problems the lack of human capacities for agriculture development to meet the needs of farmers, brings their malfunction. Expert B. Dervishi also listed several other factors that pose problems such as: failure to meet the criteria for land-working by damaging it, the lack of chemical analysis of soil and water used for irrigation, and recommending to take into account the product marketing service development to avoid consequences such as the stock of all production but also the economic damage to farmers. 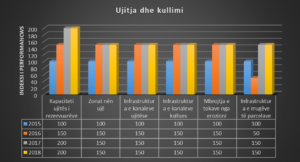 On the other hand, representatives of the forestry sector in the Municipality of Devoll emphasized that the Municipality has already an inventory of the forest fund and their management plan, but the problem lies in the supply of the firewood for the population. The capacity is currently Zero and this goes to forest damage in the area. Farmers in the village of Tren have listed a number of issues starting with land plowing, which leads to an increase in erosion rates, lack of an agronomist to maintain productivity, controlling the quality of manure used, inappropriate apple spraying as a result of the lack of a specialist, the establishment of a laboratory for product control, and the lack of information on the use of the chemicals used by the farmer.

From the discussion with the participating community, the development of the Prognosis Signal Center, which will assist farmers with technical assistance, as well as the necessity of an agronomist for advisory assistance, became a priority.

The second forum held in Bilisht Qender Administrative Unit will be followed by 2 other round tables to be held in Hoçisht and Proger. The local forums will be finalized with a discussion table in the town of Bilisht. Recommendations coming from consultations, the community and local representatives will be reviewed and adapted to the final draft of the barometer and will also serve as a benchmark for the preparation of priorities in the aforementioned areas directly from local needs.

This meeting was organized under the project “Devoll Barometer: Evaluation of Local Promises based on Article 27. Municipal Functions in Agriculture, Forestry and Rural Development”, implemented by ACEG in partnership with local NGOs Gjelberimi Proger Association and Devoll Citizen Advisory Committee. The project is funded by LëvizAlbania – for a strong local democracy and funded by the Swiss Agency for Development and Cooperation – SDC.